The experience from the North Bohemia expedition suggests to me the acceptance of an ambivalent approach. On one hand, the level of devastation of this particular landscape is striking. On the other, questions arise concerning its renewal, involving questionable methods of recultivation that draw upon exceptional technical and economic resources, in order to make possible the transport of an enormous volume of material.

In the complexity of the mining systems, which have become a permanent feature of of this region’s present and future, we find a multilayered network of ancient geomorphic processes of sedimentation folded together with the current realities of an energy-based economy. This includes an obscure web of particular financial and economical interests. In considering the consequences of these processes, any pragmatic approaches that have been offered seem inconclusive. In addition, the quantity of matter to be transported strains our belief, not only in terms of its massive scale, but also its duration. This barely comprehensible framework leaves a feeling of ambiguity towards the claimed efficiency of coal mining as a business.

The main inspiration comes from the multiple technical solutions involved; the efficiency derived from connecting single components chained into monstrously complex mega-machines. The fundamental concept of the project is to observe, and hopefully to understand, the principles of these technological parts and assemblies, and attempt to alter their scale. People usually observe this landscape in transition from above – regarding it from a distance, which alters the perceptions of its proportions, and brings into it the phenomenon of remoteness. The open-cast mine reminds me of a bizarre model of a sandbox, with tiny moving mechanisms down below.

The process of researching, comparing and absorbing all of this information spurs a rearrangement of deep-rooted notions into new configurations. The personal experience of a specific place, not limited to the visual, affects a broad array of thoughts. This will be the starting point of my project, but apart from this, I will also reinterpret several existing works of mine. The context will have a decisive effect.

The typical machine for the large-scale transportation of material is a conveyer belt, a system of interconnected single belts that function cyclically, controlled by a central system. Junctions are created between individual mining machines, and despite their seeming pasivity, it reminds me of an anachronism: the teleporation of coal. The landscape is disassembled, transported, and reassambled in different place.

One of the working principles for me is the inspiration drawn from a conveyer belt, with the idea of scaling it down. I will make use of the sound of machine recorded onto magnetic tape. The tape is at once an audio track, and at the same time, a symbol of the endlessly moving belt, taking the form of a modular and variable kinetic and sound installation.

The object "Ecce Electricitas"/Ejhle elektřina is conceived as a model, referring to a real phenomena or it's strata. The steel sphere is connected to the source of high voltage electricity, and its electromagnetic field rotates tiny propellers on the surface. For viewer is reason of this movement hidden. If one accepts the perceptual scale, the sculpture can be perceived as a model of some buzzing planet, including its energetic systems, which remind us the propellers of wind generators. Its sense is difficult to get, as to many of our ways of dealing with energy sources.

Robert Vlasák (b. 1978, Kladno) is a visual artist and sculptor. He works as asistent professor at the Studio of Natural Materials at the Faculty of Art and Design at the J. E. Purkyně University in Ústí nad Labem. Vlasák’s work inquires into the physical qualities of different materials and situations. He is interested in the concept of equilibrium, which he explores by means of visualisation and sonification. Vlasák is interested, too, in the mechanical and optical aspects of objects, sometimes implemented as electronic and sound-producing elements. 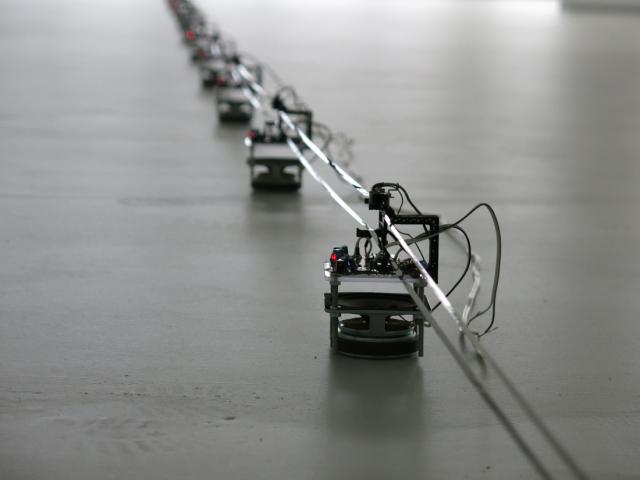 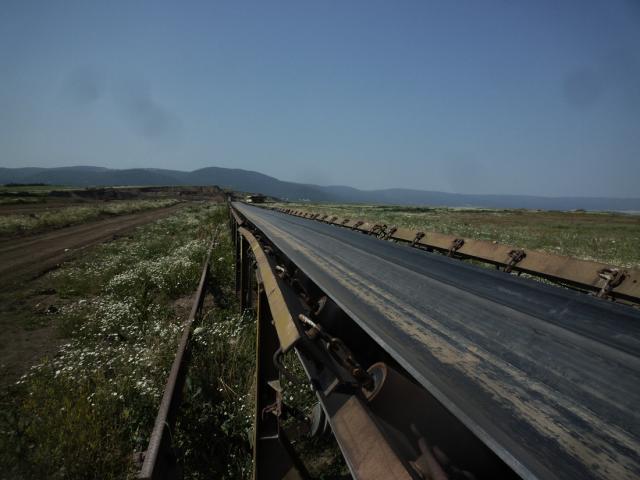 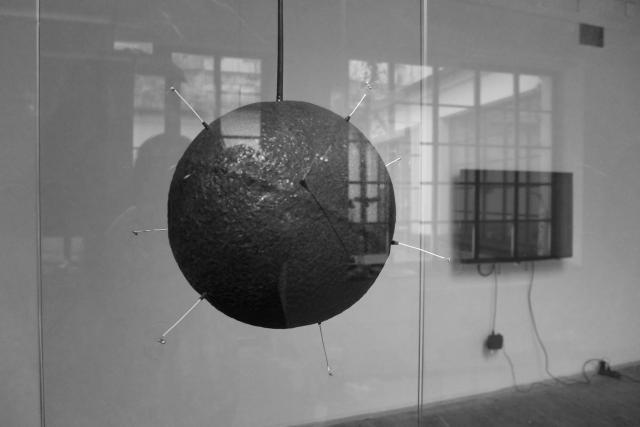 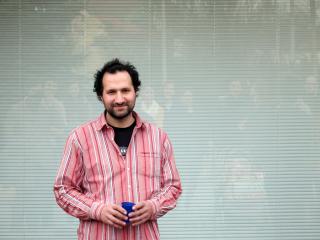