Frontiers of Solitude: A project presentation

Recently the Frontiers of Solitude collaborative project between Školská Gallery in Prague (CZ), Atelier Nord in Oslo (NO), and Skaftfell - Center for Visual Art in Seyðisfjörður (IS) came to an end. From April 2015 to April 2016 Frontiers of Solitude has worked with 20 artists through a series of field expeditions, workshops, lectures, symposia, and exhibitions.

The project has focused on the effects of recent industrial human activity on the natural world. It invited its participants to observe and address
the ecological and socio-economic impacts of energy production and mining on specific landscapes in Czech Republic, Norway, and Iceland.
In the context of the project six artists from the three participating countries were invited to East Iceland in August 2015. Organized by Skaftfell, they undertook a 12-day expedition tracing the ecological and socio-economic effects of hydropower, in particular the systemic connections between Kárahnjúkar hydroelectric dam, Alcoa Fjarðaál in Reyðarfjörður, and the Héraðsflói estuary in East Iceland. Four more artists from Iceland took part in similar multinational expeditions, which led them to the industrial mining and oil refinery sites in northern Norway and to the open pit coal mines in Czech Republic.

The works shown in the Skaftfell gallery present a selection of artistic responses to these three expeditions. The Frontiers of Solitude project has been exhibited in its entirety at Skolska Gallery, Fotograf Gallery, and Ex-Post Gallery in Prague (CZ), co-curated by Dana Recmanová (CZ), Ivar Smedstad (NO), and Julia Martin (IS).

A selection of works has been shown at The Vysočina Regional Gallery in Jihlava (CZ). Further presentations are planned at the Jan Evangelista Purknyné University in Ústi nad Labem (CZ), and at Atelier Nord in Oslo (NO).

The project is documented in a catalog which is available for viewing in the Skaftfell gallery. At Skaftfell,

The project has been supported by an EEA grant from Iceland, Liechtenstein, and Norway.

Karlotta J. Blöndal works in a variety of media, including drawings, paintings, publications, installations and performances. Her work often uses found documents, exploring the tension between presentation, re-presentation and value in the art object. …

Monika Fryčová is an audiovisual artist, performer, and writer. She frequently deals with mixed media and untranslatable experiences, trying to perform under their own rhythms – the Here and the Now – the search for the primal source constantly found, only to be deserted again. …

Diana Winklerová is a sculptor and musician living and working in Prague. She graduated from the Academy of Applied Arts in Prague from the sculpture studio under the guidance of prof. Kurt Gebauer. …

Greg Pope is a British media artist and filmmaker who currently lives in Norway. After dabbling in punk rock bands and absurdist performance, Pope founded the Brighton-based super-8 film collective Situation Cinema in 1986, and afterwards, Loophole Cinema in London, 1989. …

Kristín Rúnarsdóttir is a visual artist living and working in Keflavik, Iceland. Her work finds inspiration in the curiosities of sign systems, rules, and organization. …

Þórunn Eymundardóttir, The Sky Over Libkovice. Postcard multiple, front side, 2015.

Þórunn Eymundardóttir works in various media, such as installations, performances, video and audio, sculpture and photography. The exploration of boundaries between the self and the other, and the elevation of everyday life are at the core of her practice. … 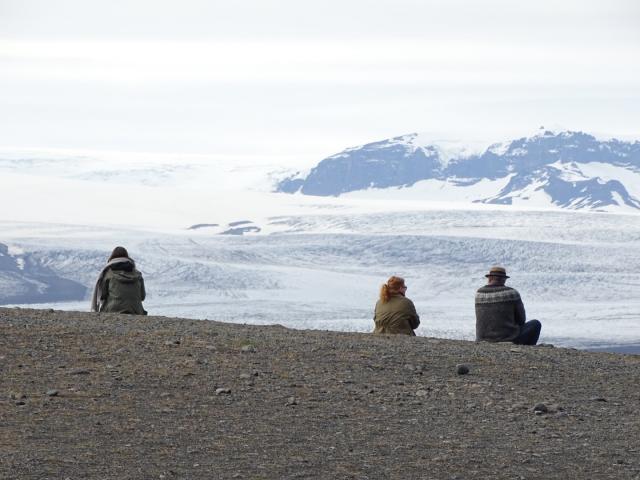