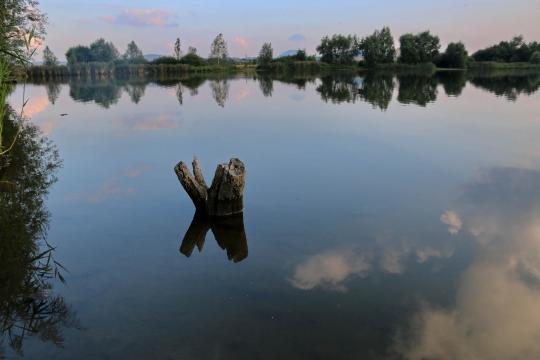 Mariánské Radčice was called Maria Radschitz before. In its church they venerated the miraculous wooden statue of the Virgin Mary since the Middle Ages, and on the great feasts of Mary they led pilgrimages here from the Cistercian monastery of Osek – the former Ossegg – six kilomters away. The pilgrimages were first mentioned in 1278. Over the centuries, the pilgrimage developed its own path, away through Bruch, and back through Liquitz and Herrlich. The path was lined with medieval image columns, Baroque chapels, crucifixes and votive columns.

This area is one of the largest brown coal deposits of the Czech Republic. The deposits extend seventy kilometers long and twenty kilometers wide from the town of Klášterec to the German border. References to its mining were made as early as the 15th century, but its real exploitation started in the middle of the 19th century. Local entrepreneurs opened a number of mines in the region, also marked on the above pre-war map, which were an important source of local employment and wealth.

After the war, with the deportation of the former population, and the new, Communist approach to nature as an opponent to be subdued, every obstacle was cleared from starting surface mining. Thousands of acres of hillsides were scraped down, together with dozens of centuries-old villages built upon them. The surface coal mines have hitherto swallowed more than a hundred towns, but the exploitation of a further nine million tons of coal still under ground will require the depopulation of even more settlements. Bu the original inhabitants of the towns, who would have fought for their survival, have been deported, and the new inhabitants, who received their homes as a gift of the state, are not strongly bound to them. Instead, they rejoice if they are relocated from the rundown German houses to newly built city homes, and so the process goes on essentially unimpeded and without much controversy. “What can we say? Money lies thick under the ground, and they will take it out of there, whether we like it or not.”

We are walking from Mariánské Radčice towards Osek on the former pilgrimage road, on which once the villagers set out to ask for protection from evil, and on which now evil has set out towards the villages left without protection. Our guide, Michal, soon goes off the road. We arrive at a lake. “When I first came here, someone let his Newfoundlander dog swim in the lake. I asked him whether the water was clear. He said: how could it be clear, if a railway station is at the bottom?” The railway station was flooded with ground water continuously pumped up from the coal mine after the town belonging to it, Libkovice, earlier Liquitz, was eradicated in the 1990s.

The pilgrimage road runs past old concrete foundations, the ruins of a camp of seventy years ago. According to the locals, it was a concentration camp built by the Germans, but this is just the adaptation of the collective memory to the ideal history. In the reality, it was a prisoner of war camp in the final months of the war, where the displaced Germans were held in detention for months, before being deported, including all the monks of the Cistercian monastery of Osek, led by Abbot Eberhard Harzer.

The houses of the town have already been bulldozed, its asphalt torn up, its trees uprooted. All the remnants of these these have lain in large mounds for years, deer run among them, darting away as we approach. Here and there, we walk on fragments of a concrete road, along which fruit trees still produce sweet plums and sour apple. We have enough to eat of it. Near the site of the church rubble, some meters from the road, the remains of a former fountain hides among the trees.

After the village, the pilgrimage road is interrupted, engulfed by the mine. An embankment crosses it, on the top of it runs a pipeline pumping ground water from the mine, it is accompanied by a dirt road for the cars of the security guards. Beyond the embankment, a leveled and flooded land, coated with mud and hardened clay, rises to the half-cut hill, from where you have a breathtaking view over many acres of lunar landscape. You see no men, only the kilometers-long spiraling conveyor belt, which with a monotonous clattering brings up the coal from the bottom of the two-hundred-meter deep pit. The only living creature is a wild boar, looking for food at the foot of the hill, which then catches the smell of us and gallops away. We take a pictures of each other in the pose of Caspar David Friedrich’s wanderer contemplating on the destruction.

Dusk, the sun goes down. Cold wind rises. We go back. Somehow we fall into the scope of the security cameras, alarms sound along the conveyor, security guards arrive by jeep. At the sight of the lost hikers they cheerfully chat with us for a while, then they show us the shortest road to Mariánské Radčice, on the former pilgrimage road through the remains of Libkovice. We set out on it.