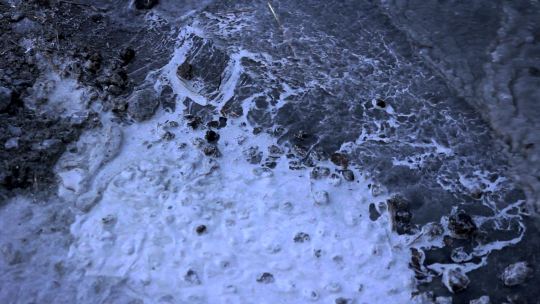 Nothing worse or better can happen.

One can only crawl down. The black stone which is mixed with mould and soil from the landslide and smells of erosion, stone, chill, damp, and there one can lie down.

The cheek against the cold, and the light above cannot move. It is searching to penetrate deeper, for slits and wedges in the massive stone dust that followed the slide.

Then one may first sleep and then experience the growing cold and then death.

A glimpse of an incision between the shoulder-blades, in against the muscles at the rib-bones, and over the heart muscle´s system and veins: The heart has forgotten to answer, it lies quietly and pumps, another state, another condition in the faintness which sweeps down over it, like the stone dust which now covers all of the rounded opening to the open fields up there;

the fields that sway in half-daylight the trees that bend and rise, the wind forces them to let go, and presses the dark dust over the new gap, the crater which opened up, suddenly

An old wound in this wide open territory, only trees and fields and some ancient drains and ditching and dams, cool leaning ridges withour habitat; but the damage gave way in a three-day rain and the eruption was momentous, no warning.

Why does a [man][someone] slide under stone and earth, with coiled, entangled meshes of vein threads from grass and a few bushes?

[She] falls downward, equally in pace with stone, gravel and forms of roots; dry sand liberated after one hundred years of enclosure, dust falls, like a frisky playful gesture, over the falling [man].

Straight down it goes, fifteen or twenty meters, a round crater with vertical walls, and [she] gets on her feet down there, above her it is still sliding and moving, it sounds, in rumbles and like siskins

black-brown smoke hovers up there, compact like night fog, and [she] cannot see if she sees. [she] shuts her eyes, hard, and looks again, but the density above her moves, a heavy swell of darkness

one can only lie down, one´s cheek against the chilly stone and soil, the cold this deep down, this, the mine’s lungs and domain, it breaks out from below.

“Was there a mine here?” [she] asks, when everything, at once and suddenly, turns silent.

The wind above cannot find a slit or an area of transparence with openings where the sound can sift down; one can hear one thing only: the intense noise of one´s head and eventually, when [he] is getting colder, when his body´s weakness spreads [he] hears his heart and pulse, they talk and talk.

It could be, that down here, here, the city that was mowed and dug down is pumping, relics of buildings and flakes of crushed walls in colours, with plaster work, iron gates and ornaments which circled a beautiful garden or at the top of a house, is this alive?

Everything ripples like subsoil water toward [her] still and quiet body and the consciousness makes free with hardness, or lightness.”

· on the city which was dug underground and became one with the mine’s domain.

· on subsoil water which is filled with what? and enclosed under earth

· on man’s history which moves higher and higher up in the atmosphere and deeper and deeper down in earth.

We do not know what we are doing.

Školská 28
Gallery Školská 28 (DEAI/Setkání) is a multifunctional space for nonprofit cultural and artistic activities, founded in Prague in 1999. …