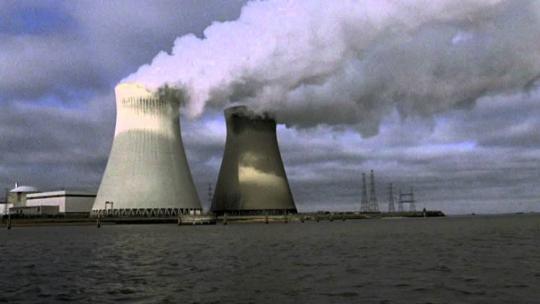 The Forgotten Space follows container cargo aboard ships, barges, trains and trucks, listening to workers, engineers, planners, politicians, and those marginalized by the global transport system. We visit displaced farmers and villagers in Holland and Belgium, underpaid truck drivers in Los Angeles, seafarers aboard mega-ships shuttling between Asia and Europe, and factory workers in China, whose low wages are the fragile key to the whole puzzle. And in Bilbao, we discover the most sophisticated expression of the belief that the maritime economy, and the sea itself, is somehow obsolete.

A range of materials is used: descriptive documentary, interviews, archive stills and footage, clips from old movies. The result is an essayistic, visual documentary about one of the most important processes that affects us today. The Forgotten Space is based on Sekula’s Fish Story, seeking to understand and describe the contemporary maritime world in relation to the complex symbolic legacy of the sea.

"In effect, I am arguing for the continued importance of maritime space in order to counter the exaggerated importance attached to that largely metaphysical construct, "cyberspace," and the corollary myth of "instantaneous" contact between distance spaces. I am often struck by the ignorance of intellectuals in this respect: the self-congratulating conceptual aggrandizement of "information" frequently is accompanied by peculiar erroneous beliefs: among these is the widely held quasi-anthropomorphic notion that most of the world's cargo travels as people do, by air. This is an instance of the blinkered narcissism of the information specialist: a "materialism" that goes no farther than "the body."" Allan Sekula

Notes for the Film by Alan Sekula and Noel Burch

The subject of the film is globalization and the sea, the ‘forgotten space’ of our modernity. Its premise is that the oceans remain the crucial space of globalization: nowhere else is the disorientation, violence and alienation of contemporary capitalism more manifest. But this truth is not self-evident and must be approached as a puzzle, or mystery; a problem to be solved. Sea trade is an integral component of the world-industrial system, but we are distracted from the full implications of this insight by two powerful myths. The first is that the sea is nothing more than a residual mercantilist space: a reservoir of cultural and economic anachronisms, relics of an older and obsolete economy—a world of decrepitude, rust and creaking cables, of the slow movement of heavy things. The second is that we live in a post-industrial society, that cybernetic systems and the service economy have radically marginalized the ‘old economy’ of heavy material fabrication and processing.

Thus the fiction of obsolescence mobilizes reserves of sentimental longing for things which are not really dead. As ships become more like buildings—the giant, floating warehouses of the ‘just-in-time’ system of distribution—factories begin to resemble ships, stealing away stealthily in the night, restlessly searching for ever cheaper labour. A garment factory in Los Angeles or Hong Kong closes; the work benches and sewing machines reappear in the suburbs of Guangzhou or Dacca. In the automobile industry, for example, the function of the ship is akin to that of conveyor systems within the old integrated car factory: parts span the world on their journey to the final assembly line. Today, over 90 per cent of the world’s cargo moves by sea. Without a ‘revolution’ in ocean-going cargo-handling technology, the global factory would not exist, nor the phenomenon of globalization itself. What began in the mid-1950s as a modest American improvement in cargo logistics has now taken on world-historic importance. The cargo container—a standardized metal box, easily transferred from ship to truck to train—has radically transformed the space and time of port cities and ocean passages. There have been enormous increases in economies of scale. Older transport links, such as the Panama Canal, risk sliding into obsolescence as ships become more gargantuan.

The film moves between four port cities: Rotterdam, Los Angeles, Hong Kong and Bilbao. It visits the industrial hinterland in southern China and the transport hinterland in the heart of Holland. The first three can be classed as ‘super-ports’, the largest in the world. In Bilbao, a fading port with a brave maritime history, functional atrophy coexists with the symbolic hypertrophy of the Gehry Guggenheim, a delirium of neo-baroque maritime nostalgia wedded to the equally delirious promise of the ‘new economy’. Super-ports, pushed to the periphery of the metropolitan centre, require vast tracts of land for the containers’ sorting and storage. The old, sheltering deep-water port, with its steep hillsides and panoramic vistas, is less suited to these new spatial demands than low-lying delta plains, which nonetheless require continual dredging for the ever-deeper draft of the new super-ships. The old waterfront culture of sailor bars, flophouses, brothels and ship chandlers gives way either to a depopulated terrain vague or—blessed with the energies of real-estate speculators—to a new artificial maritime space of theme restaurants, aestheticized nautical relics and expensive ocean-view condominiums.

As the class character of the port cities changes, the memory of mutiny and rebellion by dockers, seafarers, fishermen and shipyard workers—struggles that were fundamental to the formation of the institutions of social democracy and free trade-unionism—fades from public awareness. What tourist in today’s Amsterdam is drawn to the old monument commemorating dock-workers’ heroic but futile strike to prevent the Nazi deportation of the Dutch Jews? Today’s seafaring crews are drawn from the old and new Third Worlds: Filipinos, Chinese, Indonesians, Ukrainians, Russians. The conditions they endure are not unlike those experienced by the lascars of the 18th century. The legal instrument underwriting their exploitation is the ‘flag of convenience’ system, which allows ships owned in rich countries to be registered in poor ones. Here again, American capital was in the lead, seeking to break powerful maritime unions in the wake of the Second World War: the flag of convenience was created to obscure legal responsibility for safety and fair labour practices.

The cargo containers are everywhere, mobile and anonymous: ‘coffins of remote labour-power’, carrying goods manufactured by invisible workers on the other side of the globe. For apologists of globalization, this flow is indispensable for the continued prosperity of the West and for the deferred prosperity of those who labour, so far away. But perhaps this is a case for Pandora—or for her more clairvoyant sister, Cassandra.