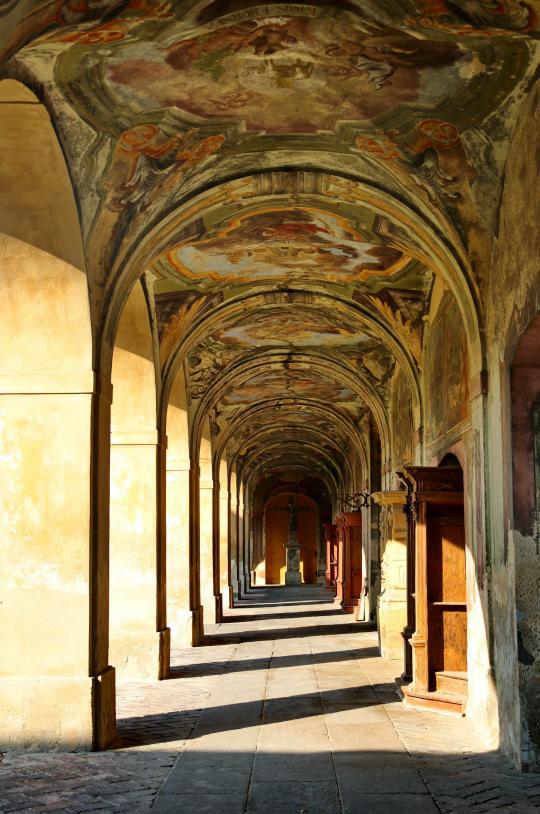 The pilgrimage church of Maria Ratschitz was first mentioned in the breve of 1289 of Pope Nicholas IV, where he allowed forty days of indulgence for the pilgrims coming here. The Cistercians of Ossegg enlarged it at the end of the 17th century, adjoining to it a monastery-size parish building for the numbers of pilgrims. The vault of its cloister are decorated by emblematic paintings representing the titles and epithets of the Virgin Mary listed in the Litany of Loreto. On its walls, scenes follow one another in a long line, each with a different miracle of Mary helping those in distress. Above the scenes there were once German-language descriptions, which have now been illegibly whitewashed.

After the expulsion of the Germans, the church and the parish were closed, and they started to decay. Only after 1989 were the expelled Germans given the opportunity to repair it at their own expense, like most of the monuments in the Sudetenland and Böhmerwald.

A curious small open-air museum is set up in front of the gate of the parish. With the gradual spread of surface mining, they collected here from the devastated area and the engulfed pilgrimage road the smaller church monuments, crucifixes, statues of St. John of Nepomuk and image columns, like the deer moving uphill from a flood. But they might not be saved. The boundary of mining is just a few hundred meters from the village, and it is rumored, that with the widening to be foreseen in the next months, Mariánské Radčice will also fall within the mining area. For the moment, nobody knows anything for sure, and the villagers apathetically face the eventuality of liquidation.

There is also an information board in front of the parish gate. Among all the information boards of the area, this is the only one which was written in two languages, Czech and German, and the only one referring to a “German-Czech history”. The board only says briefly, how great a value the underlying brown coal represents, and how beautifully they will rehabilitate the land after 2030, with the completion of surface mining. A two-hundred-meter deep lake will extend on the 930-hectare mining site, whose surroundings will serve the purpose of recreation and entertainment.

The patron feast of the church is 12 September, the name day of the Virgin Mary. On this day, a Mass is held in the church, which is completely filled. The faithful are nearly all Germans, who come home for this day from Germany, Austria, or even farther. The choir is German as well, just like the organist, who plays on the synthesizer brought with him, as the organ of the church has long since disappeared. The Mass is celebrated by two bishops, one from the local Czech diocese, the other from Germany. Both of them say a sermon, first in Czech, then in German.

The name day of Mary has been a feast in the Hapsburg Monarchy since 1683, when they repelled the Turks from Vienna on this day. It has always been considered a mainly German feast, therefore it is no wonder that the Czech bishop speaks instead of Our Lady of Seven Sorrows, more honored in Czech and Slovak lands, whose feast will be three days later, on 15 September. He tells the Czech-speaking faithful, that as Mary took part in the suffering of Christ, so we should feel empathy for the suffering of thouse around as. The suffering of the sick. Of the refugees. And of the displaced.

Then the German bishop continues. He speaks of the suffering of the displaced, of the deportation, of the homesickness. And that in spite of everything, we must be able not only to feel the suffering of others, but, like today, also feast together with them. None of them mentions names of nations, but the handful of Czech and Germans who gathered here in the church, in the shadow of devastation, know well whom they refer to.